Rina, Maria and the World as it was 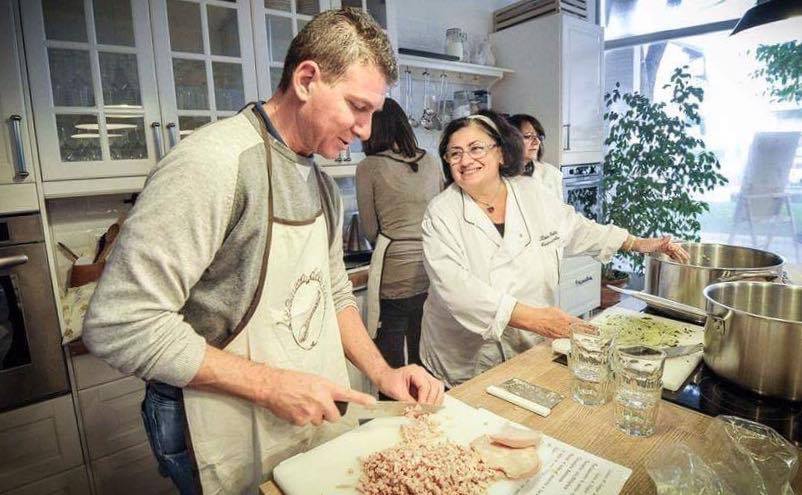 Rina is a sfoglina, a pasta fresca cook. In fact no, she is a maestro of pasta fresca. She runs courses around Italy, writes books, is interviewed on the radio and teaches chefs all over the world kneading and pulling pasta until it is thin, elastic and perfect. Also to the Italians who no longer know what a rolling pin is. 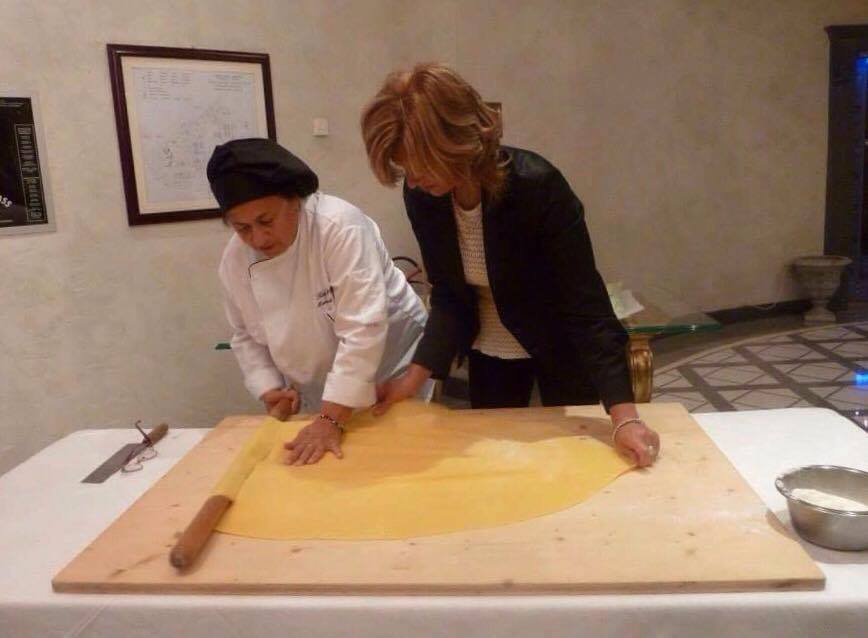 Besides, Rina is a witness to a precious cultural heritage. Sostegna, my grandmother Clara’s older sister, every morning got up and, as first thing, prepared the pasta fresca – not a single day in the year excluded. So, I have this story somewhere in my DNA, but it is only thanks to people like Rina that it now comes back to me.

Waiting for knowing more, maybe during a pasta fresca course, I asked Rina to tell me something about herself. Ah, of course, Rina is also a loving grandmother and that is why I contacted her: I intend to invite her to tell us about that in the future. Anyway, here is Rina’s story.

“My mother’s name was Ada and I’m the last of her six children: between her first daughter Maria and me, there were 24 years. I have always been close to my brothers and sisters but the relationship I had with Maria was special. Maria was the result of a youthful love affair: my mum was only sixteen at the time and never revealed the father’s identity.

Maria grew up with my maternal grandparents until my mother met my father, Gino, who fell in love not only with her, but also with the little girl. He accepted her as a daughter even before he married my mother. Gino has always been a mature and responsible father, but above all he has always been ready to accept and love children born of another relationship.

They started life together with the eight-year-old child and went on to have five more: first, two males and 13 years later, a female. Then in June 1949, Ada and Mary, mother and daughter, each gave birth: my sister had Roberto on June 4th, and on the 21st my mother had Fernanda, the penultimate.

I am the last of the family. At my birth in 1951, my mother had already turned 42 and I had five brothers and a nephew of almost four years – I was born an aunt.

Mary is the youthful image of my first memories, while Mum Ada was an old woman for me. At that time a 42-year-old woman was already resembling her grandmother’s, with all her hair in a chignon which in dialect we called pippullo.

Although with all the post-war uneasiness and hardships, I grew up with an awareness of having the large family to rely on. In fact, my childhood and adolescence developed among several adult figures and so many children, 13 of my brothers’ kids. Even when I was very small, my mother began to play a major role as a grandmother. All of these grandchildren were bred by her, including my only daughter Alessandra.

To return to Maria. She was a wonderful woman, extraordinarily generous with all the brothers. When she arrived at our house with her red scooter and red lips carrying a bag full of fruit, sweets and so many good things that she had prepared specially for us. She was always cheerful, singing, smiling and brought a great warmth into our home, where there was always harmony but also the fatigue on the part of mama Ada, who did the housekeeping in addition carried a heavy load of her own.

My memory of my mother Ada is that of a severe woman. She was especially strict with her children, with no consideration for their differing personalities. But sweetness, smile and joy are what Maria taught me: so not just a sister, but young mum whom I have always been attracted to for her positivity, cheerfulness and good humour. I only found out at fifteen that she was not my father’s daughter. At first it was with unbelievable sorrow. Later I became aware of the fact that Maria was an angel on earth to give comfort to this great family. Many believed me to be Maria’s daughter. Roberto, her son, always hastened to point out that I was his aunt, despite the laughter of those who saw this little aunt’s grandson.

Memories of Maria are so many. One is related to the recipe of a rustic cake (the Gnoc) I want to tell you now.

Towards the end of July, when the summer heat gives its best, is the ideal time to harvest the figs. So, every July  Maria made me climb to the top (I was the smallest kid) to pick the biggest and more mature – ideal for the Gnoc. Back home, they were cut in half and lay on a bed of reeds to dry in the sun for several days with a ritual that was strictly respected: in the morning when the sun was high they were brought out and before the dew of evening re-collected. After days of this work, the figs were finally dried and we had the basic ingredient for our recipe.

But… it was then necessary to wait for the autumn. After harvesting, there were small branches of the vine left here and there – the grapes completely dried and wrinkled. With the first chill of autumn,  the house was heated by the stove and Maria placed the grapes among the embers or ashes of the oven. And so we had the sultanas, the second ingredient for our Gnoc.

Then the corn flour. Maria wanted that fresh, just ground, because she said “the older flour is good for chickens”. Although we were poor, some fresh corn flour, we could afford.

One lemon  was usually kindly donated by an elderly Sicilian widow who lived near us – the only person who grew lemons in our village.

For the last ingredients we had to wait for Sunday, when Maria was usually going to a local farmer to buy a hen. She always was returning with a live hen who’s eggs were still warm.

At that point, in front of us children, my mum Ada, was going into action. In one swift move she snapped the hen’s neck. Maria plucked the feathers, washed and cleaned out the interior and jealously holding the yellow fat because that was the only fat to use for the Gnoc.

Mary then was mixing all the ingredients, without ever measuring them, and adding a little milk to give the right creamy consistency for the wood-fired oven.

Every time, I could not wait for it to cool down: I was always the first to try a slice searching for the fig and the raisin, and Maria was beating me on my hands, telling that cakes are not to eat hot, otherwise they burn the stomach.

In the meawhile my mother was preparing the noodles (tagliolini) for the broth boiling on the fire. So, it was really Sunday: we were all ready for lunch, and maybe …we were always too many!!!

The recipe of the Gnoc as I prepare now

I’m always wondering if this recipe was invented by Maria or she learnt it somewhere… Anyway, here it is, as I have reprocessed it, with precise amounts (which Maria certainly did not measure) and butter instead of hen fat.

So, you have Maria’s recipe. But this is also my way to lovingly remember her, my second mum.”

The cover photo was shot during a course organized by La Glassa delle Fate.

If you want to practise your Italian, go to the translated post.